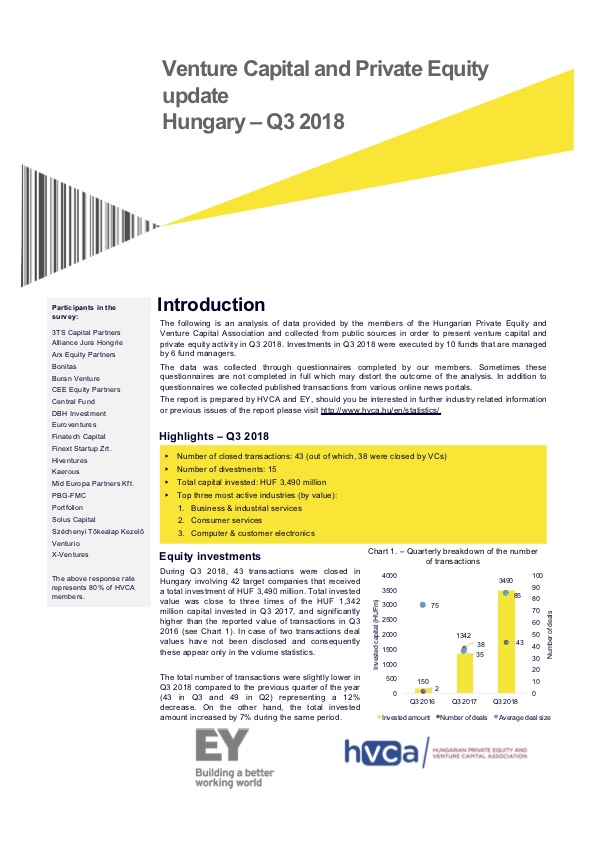 Participants in the survey:

The above response rate represents 80% of HVCA members.

The following is an analysis of data provided by the members of the Hungarian Private Equity and Venture Capital Association and collected from public sources in order to present venture capital and private equity activity in Q3 2018. Investments in Q3 2018 were executed by 10 funds that are managed by 6 fund managers.

The report is prepared by HVCA and EY, should you be interested in further industry related information or previous issues of the report please visit http://www.hvca.hu/en/statistics/.

During Q3 2018, 43 transactions were closed in Hungary involving 42 target companies that received a total investment of HUF 3,490 million. Total invested value was close to three times of the HUF 1,342 million capital invested in Q3 2017, and significantly higher than the reported value of transactions in Q3 2016 (see Chart 1). In case of two transactions deal values have not been disclosed and consequently these appear only in the volume statistics.

The total number of transactions were slightly lower in 500 Q3 2018 compared to the previous quarter of the year  (43 in Q3 and 49 in Q2) representing a 12% decrease. On the other hand, the total invested amount increased by 7% during the same period.

Q3 2018, the largest reported transaction was theseries B fund raising of Tresorit with an investment
amount of EUR 11.5 million led by 3TS Capital Partners and Portfolion with the participation of some of the existing investors as well.

The average deal size was HUF 85 million which is 27% higher than HUF 67 million in the previous quarter.

30 out of the 43 transactions were first time investments, which represents 50% of the total amount invested (compared to 81% of the previous quarter).

VC start-up phase was the most common investment stage in terms of invested capital (HUF 1,264 million), accounting for 36% of the total investment value during Q3 2018 and with an average deal size of HUF 158 million. At the same time VC start-up investments amounted to 19% of total number of deals.

In Q3 2018, the largest transactions occurred in the business & industrial services sector (including the Tresorit fund raising) and in the computer & consumer electronics sectors.

In addition to the business & industrial services and computer & consumer electronics sectors, several HUF 100 million plus transactions were reported mostly in the consumer services sector.

Based on the form of exits, divestments comprised of 7 divestment by trade sale, 4 sales to management – which in general, is not considered as a successful exit -, 3 divestments by write-off, and1 sale to other private equity firm.

The life of exited investments varied between 0 to 11 years (see chart 5). The average life of the 15 exits in Q3 2018 was around 6 years compared to last quarter’s 5 year.

During Q3 2018 42 companies received HUF 3,490 million from VCs and PE funds. The largest amount was allocated in the VC start-up phase (HUF 1,264 million), but in number terms most of the transactions were VC incubations (20 out of 43).

Companies operating in business & industrial services sector received 57% of the total capital invested in the quarter.

Considering invested capital, the two most active sectors accounted for 74% of the total market activity and 53% of the number of transactions.

Significant transactions of the quarter included the series B fund raising of Tresorit.

There were 15 divestments by 5 funds in various sectors.